This book is instantly engaging. It is neat and well organized and the color palette is muted and very pleasing yet still finds a way to “pop” and grab attention. The book is full of very cute cartoonish images to accompany each pose and sequence. They are easy to follow and sweet. The kids wear aqua blue or chartreuse green, so there are no pink for girls and blue for boys images; which is very refreshing! The meditation scripts are easy to follow and read aloud to your children or students so can be enjoyed by yoga teachers, families and in school.. Although there are labels “beginner”, “intermediate” and “advanced”, the book does a very good job of not seeing yoga as linear. Everyone can enjoy the pleasant flow of this book. I can’t wait to take this one to my kids yoga classes and share it with my students. I know it will be a big hit!

Thank you to Skyhorse Publishing for sending me a copy of this book. All opinions are my own.

I was delighted to receive this cornucopia of items from Storytime Yoga‘s creator Sydney Solis. After reading her bio, I can safely say that Ms. Solis has created a yoga program that is full of love, dedication and the amazing art of story telling!  She is truly one of the pioneers of the art form and I can hear her rallying cry of “We can get kids moving using story telling, vivid imagery and movement.” Without a doubt, Ms. Solis embraces “educate the whole child!”

This is a very accessible program, making it great for both practitioners and non-practitioners of yoga to use. Personally, I have found the teachings from the two books to be an invaluable addition to my own teachings. I have used the wisdom of the story teller in many situations. Thank you Ms. Solis! Deep gratitude! I highly recommend Storytime Yoga. Go forth and give yoga!

Thank you to the Sydney Solis for sending me this amazing bundle! All opinions are my own.

I was pleased to receive the book Growing Up Mindful from the author, Christopher Willard, PSYD. As I have become increasingly more focused on bringing mindfulness into situations where mindfulness might not be readily available, such as in schools, offices, and  with the special needs populations, I have enjoyed the wide array of books on the practical applications of mindfulness, that I can adapt to my needs. Dr. Willard is at the top of the game. This book was really user-friendly with just enough scientific knowledge mixed with common sense. A dream book of ideas to help create a sense of balance, ease and flexibility in your life, that of your family and also to those around you. From the excellent mindfulness exercises to the practical advice, Dr. Willard offers creative and useful scripts, examples and ideas on how to bring mindfulness into your day. I highly recommend this book. It is an excellent tool for anyone: parent, teacher, and boss who wants to help young people bring mindfulness into their lives.

He also has an audio companion to his book available on Sounds True and a great set of Growing Mindful card deck that features 50 unique mindfulness activities to teach awareness, how to be present in the moment, and cultivate kindness & curiosity. Perfect for all ages!

As a special treat, here is a YouTube link to Dr. Willard’s TedX – Growing Up Stressed or Growing Up Mindful?

Disclaimer: The author sent me a copy of Growing Up Mindful. All opinions are my own.

Welcome to my preliminary teaching and performing schedule for 2016-2017. All programs are inclusive and are adaptable.

Please contact me for more information. All programs can be tailored to fit your needs.

Thank you and Remember to Always Be Dancing!

Sam and Dave are Yoga Archaeologists 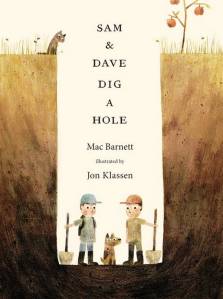 Sam and Dave Dig A Hole by Mac Barnett is an adorable and laugh-out-loud funny story about two boys and the power of determination. When I first read the book, I was struck by how closely related it was related to how I view the journey of yoga. In yoga, we are archaeologists of our bodies, mind and soul. We endlessly inquire into how our bodies work, what feels good/bad, what makes us feel better and what are our habits. With care, kindness and perseverance, we as yoga archaeologists brush away layer after layer of “dirt”to unearth our somatic history. Like in archaeology, you do not always know what you are looking for, maybe there is nothing there or maybe there is a hidden treasure. It is a slow process. New things pop up and take you down different paths of discovery/sensation. Archaeologists and yogi’s have patience, focus, a lust for knowledge, seek the unknown, show flexibility in mind, body and soul, have inner strength and above all love what they do. Same and Dave exemplify this in the fact that they are not driven by finding a treasure but instead by the evident joy along their path of discovery. The journey is the ultimate reward!

I have already brought this book with me to a number of yoga classes and as Mr. Barnett says, there is no ceiling on this book’s suggested age limit. Like him, I say this book is wonderful for ages 4 to adult. Noting the peels of laughter from the younger kids, the smirks from the mid-graders and the dancing eyes from my teens tells me “I am correct”; it’s an all-around winner!

I highly recommend this book to everyone! The illustrations by Jon Klassen are simply adorable. The fact that Sam and Dave do not have mouths makes me think they are communicating through mental telepathy and after catching the subtle artistic changes at the end of the book, my classes were lead naturally into theorizing about the ending to the story.

Full Disclosure: The author provided me with a copy of Sam And Dave Dig A Hole. All opinions expressed are my own.

Yoga for kids can be geared to teach them the meaning of yoga but with lightness, lots of levity and tons of exploration. Recently, I have been thinking of how to teach the koshas to kids. I have found that studying and teaching Esoteric Anatomy (your energetic anatomy)informs my practice and teaching in a beneficial way. The study of the subtle-body’s energies and structures supports my desire to focus inwards. Focusing on the energy inside your body is a great way to notice tensions, relaxation, and a great way to focus inside rather than just externally. I love feeling that the inside of me is just as powerful means for change as the outside.

In yoga, you can describe the functions of the perceptible (corporal) body and you can also describe the functions of the subtle (implied) body. The subtle anatomy of the humans is divided into five energetic sheaths known as ‘pancha kosha’. Pancha, meaning five and kosha, meaning layer or sheath. To explain these layers, I got out my Winnie The Pooh nesting doll-which by luck has exactly 5 layers. The outermost layer is Pooh, then Tigger, Eeyore, Owl and finally Piglet.

*Prana is the force/energy that is in our body which brings forth life. Vayu means winds. Prana viyus are energy winds inside the body.

** Nāḍis are the channels through which, in traditional Indian medicine and spiritual science, the energies of the subtle body are said to flow. They connect at special points of intensity called chakras.

***Chakra means “wheel” or “circular motion”. They are the psychic centers located in ascending order along the shushumna nadi (the spine) and are part of the nadi (“little rivers or streams”) system of yoga.

We started class lying in constructive rest, hands on belly, just noticing breath. I gave an intention for the practice which was that we were going to give our yoga practice our wholehearted attention-training the mind to regain its ability to be undistracted. This will help them to remain aware and conscious throughout the practice. I also began to explain how to do Ujjayi breath or Victory breath. With breaths in and out through the nostrils, I first had them imagine that the breath was coming from the soft spot directly in the middle of their collar bones, at the base of their throat. I explained the sound was audible only to themselves but it should have a soft oceanic pulse. Imagine they are really Darth Vader but they do not want anyone to know so making Darth Vader breath “silently”.

From constructive rest, we moved on to an easy twist, something I learned in Svaroopa yoga, which I like a lot.

Standing, breathing up and down from Up Mountain to Bent Over Forward Bend using the inhale to lift us and the exhale as we descended. This establishes a coordination of breath and movement.

High lunge on both sides ending with Downward Facing Dog. Of course we had to try 3 legged dog with some leg wags and barks! As we began to use our breath more, I encouraged them to try their Ujjayi breathing. I also reminded them of our class intention, just a few subtle reminders and they kept on track.

We then did Triangle, Tree and then Half -Moon, even going for a foot hold, which some people call Sugarcane Pose…I just call it “Wheeeeee”!

Sitting back down, Bound Angle Pose, to Revolved Head-to- Knee Pose, with Karate Chop action…taking the opposite arm, lifting it high by your ear and then bending over and karate chopping towards the pinky toe side of the extended leg to a simplified version of Marichyasana III.

Of course, I threw in a number of Child’s Poses throughout. 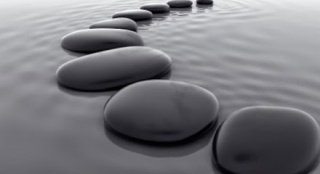 What came next was unplanned, but grew into the perfect activity to tie in the koshas. We lay the yoga blocks out in a pattern, like stepping stones. As each person began their trail, they would take the first block with them and then add it to the end of the trail, reshaping the shape. To make this an exercise in concentration, I first had them say “So” “Hum” as they walked, one syllable for each step. We then internalized this and it became a silent walking meditation. They had to pay attention to their feet or they wold fall off the blocks. The shape moved around and ended up heading into the kitchen, where after each block placement, they would walk around the kitchen island and back to the head of the trail. The shape slithered through the kitchen, back out again and across the floor, to the supply closet, where the carefully placed each block back in place and then quietly went back to their mats for Final Relaxation. This unplanned activity lasted a good 15 minutes. They all worked together, silently, and the joy and happiness radiated from within.

Here are some Babushka coloring pages and crafts or you can get your own set of Babushka dolls from https://nestingdolls.co 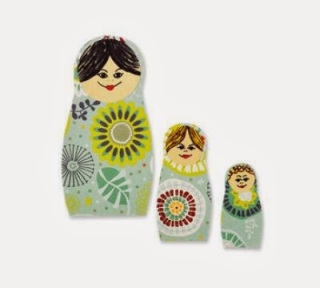